From Little to Big 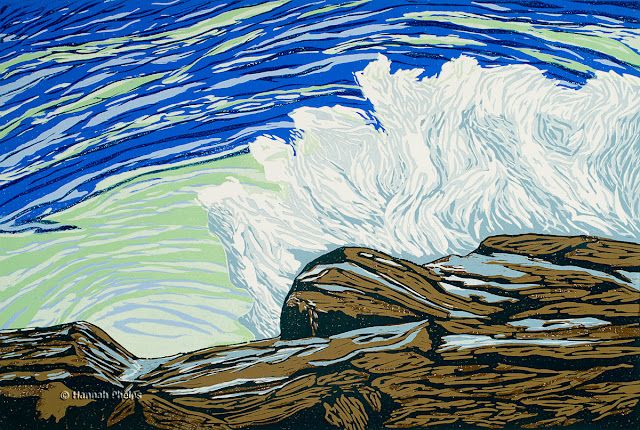 
A couple of days ago, I told you about a plein air painting from 2008 that inspired two smaller pieces - another painting and a white-line woodcut.
Even though the next two iterations of the composition were tiny, the idea loomed large and demanded another try.
It took many years to feel ready to attempt a giant version, but now there is Vanguard, which is the same design scaled up to 16"x24".
Like most jigsaw reduction prints, this took months. The first colors were laid down in the fall of 2016 and the last on Memorial Day weekend of 2017.
Part of the delay is drying time. Oil based inks dry fast in the initial layers and slow down as they pile on top of each other.
Even if they set immediately, it takes a while to decide how to proceed between layers.
There is a general idea of what colors and shapes will go where and a plan for each layer, but I wait to see how each layer behaves before making final decisions.
It appears that both the ink and my ideas need the curing time.
Sometimes that is a ten-year period.
Share Share on Facebook
Back to Blog